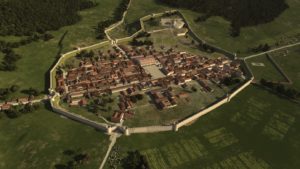 Aims of the conference

However difficult, if not downright impossible, it has proven to be to arrive at some kind of cross-cultural definition of ‘the city.’ One aspect that nearly always crops up in attempts to pin down urbanism, regardless of time or place, is the city’s physical and material aspect, its prominent urban landscape of often monumental public buildings and (elite) private residences. It was this aspect that primarily struck the conquistadores as they first beheld mighty Tenochtitlan, capital of the Aztec empire of Mexico, and led them to recognize it as ‘a great city’, despite the fact that it was built by a civilization totally foreign to them, with which they had never been in contact before. Many Greco-Roman texts also consistently stress the built environment as a defining feature of the polis or civitas, from Homer’s description of the urban landscape of Scheria, the mythical polis of the Phaeacians in the Odyssey to Procopius’ panegyric on the emperor Justinian’s building programme in the sixth century CE. Classical scholars have long shared the Greeks’ and Romans’ passion for their built environment. There is a venerable tradition in classical archaeology and ancient (art) history of detailed and meticulous study of both individual buildings and monuments as well as of city plans. In recent decades, under the influence of the so-called ‘spatial turn’, such studies of monuments and places have increasingly been combined with a study of space(s), i.e. precisely how space was articulated in the urban landscape and how individual urban elements (streets, squares, buildings) relate to one another. Even more recently, such approaches have been linked to studies of movement and dynamics, aiming to model and reconstruct how people, goods and ideas actually moved through urban spaces, as part of ongoing attempts to reconstruct something of the ‘lived experience’ of ancient cities. Revolutionary new geo-archaeological techniques (remote sensing, high-resolution geophysical survey, space syntax…) and novel theoretical models and methodologies for studying urbanism and urbanization continue to broaden the empirical and analytical basis for such studies, leading to a veritable renaissance in work particularly on Roman urbanism in recent years. What has been attempted less often, however, is the application of these new approaches to the study of economic life in Roman cities. How did spatial structures and movement dynamics in Roman cities impact on economic processes, and to what extent, and how precisely, did Roman economic activity shape and determine spaces, places and movements in cities?  In simplified terms, the current debate on the Roman economy broadly divides those who would see an integrated market economy during the late Republic and early Empire, with the imperial government ensuring that some necessary conditions were in place (a unified currency, a legal system, a road network) but otherwise staying largely in the background from those who envision a far less integrated economy, with markets playing a role, but with greater emphasis on exploitation and/or the impact of specifically Roman institutional and mental frameworks and non-market contexts of production and exchange, with a greater role for the government and political elites. One major drawback of this debate is that it largely takes place at a very high level of generality, involving contrasting empire-wide models. A resolute focus on the local urban context and on the spatial embeddedness of economic activity might well serve as an important corrective to this debate, possible bringing fresh perspectives. Conversely, a concentration on the economic side of the Roman urban experience might help us better to understand the specific character of spatial structures and movement in the cities. These, then, are the aims of the present workshop. Questions and approaches may focus on either one or more of the following themes, related to economic activity: (1) spaces, that is, the micro-perspective of individual buildings, structures and workspaces or the wider, interlinked spaces of markets, squares, streets, neighborhoods, etc., (2) places, that is, individual towns and/or networks of towns and cities, and (3) movement (of people, animals, goods, raw materials…), within particular buildings, structures, (parts of) cities, and also between cities. Naturally, the themes can be combined within individual papers. We explicitly wish to invite both classical archaeologists and ancient historians, preferably with a variety of methodological backgrounds, given that both the study of the ancient economy and ancient urbanism have increasingly become multidisciplinary endeavours that require a range of perspectives and methods to progress further. The workshop takes as its point of departure the recent work undertaken on urban sites in central Adriatic Italy and especially in the Potenza valley by the Department of Archaeology of Ghent University, and will include both presentations of results obtained and what these might mean for the themes and questions outlined here, and site visits. In addition to this, we invite papers dealing with aspects of the themes suggested above for cities in Italy (Republic and Empire) as well as in other regions of the Roman world (East and West), for comparative purposes.

8:30 Departure from the hotels to Castello Svevo

13:00 Lunch (and short visit to the exhibition “REVEALING A ROMAN LANDSCAPE. Potentia and the Potenza valley between the Apennines and the Adriatic sea”)

Friday 14 September :  Excursion in the Potenza valley and session in Treia

18:30 End of session and return trip to hotels near the coast